Our company has been engaged in solving the ecological catastrophe with toxic waste of the post Yugoslavian plant “Jugohrom” in the Egunovets сity, located in the North Macedonia.

There had been formed terrifying lakes of drainage water, which were traces of the activities of the local plant for the production of chromium.

The Jugohrom plant was built in 1952 on an area of ​​6.5 hectares. It is located 20 km north of the city of Tetovo in the lower part of the Polog valley, in a place bordering the Vardar and Gabrovnitsa rivers. Its work has historically led to the pollution of rivers, groundwater and air, but of even greater concern is the fact that the Rasce springs, which supply Skopje with drinking water, are located near the site.

Such a landscape on the banks of the Vardar River resembles shots from some post-apocalyptic sci-fi movie. But, unfortunately, in this case, it is all real.

With current technologies and traditional conservative methods this will take about 1,800 years to remove hexavalent chromium in Egunovets.

That is why the team of our specialists together with partners from North Macedonia decided to take part in the project for cleaning up the “Yugokhrom” landfill and agreed to provide the unique technologies for this.

One of the participants, Stanko Ilikj Popov  – the chemical engineer partner of PAKTI SULA DOO KICHEVO company, has said that the clear-up project was developed a year ago. The team includes also experts in the field of ecology.

The responsible group has been tasked to remove more than 7000 tons of hexavalent chromium from the landfill. It is a great challenge and opportunity for the manufacturers of modern advanced technologies to apply their developments to the benefit of the world community and the ecology of our planet.

“Neutralization of the landfill in Yegunovets can be completed within four years. During this period, soil activation and reclamation will be carried out, and all canals that can potentially go beyond the landfill will be destroyed”, – says Ilikj Popov.

The technology can be used in all places in the world where there is contamination from heavy metals such as chromium, arsenic or furans, and that these machines are not bulky: only one and a half meters wide and one meter high.

An artificial vortex that is provided in this unit is actually an electromagnetic field in a very small area that is generated by electromagnetic motion and thus speeds up a chemical reaction by 1000-2000 times.

With some changes to the process, the machines can be used to treat most of the country’s industrial water, as well as running water used by farmers for irrigation. According to the experts’ thoughts it is the most optimal and effective way for neutralization of heavy metals, furans, organic compounds in soils and waters. 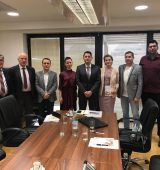 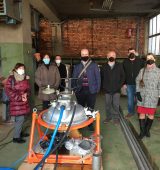 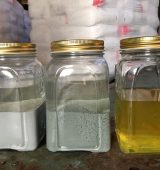 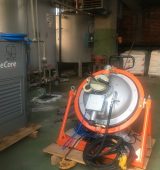 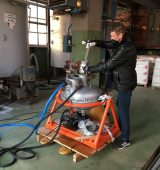