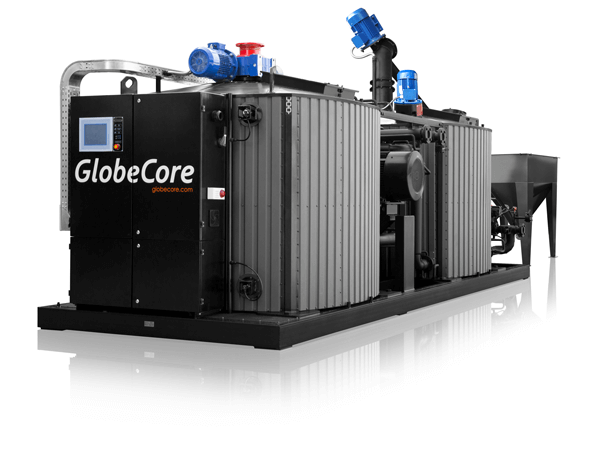 The application of polymers makes original bitumen1A bitumen is a sticky, black, and highly viscous liquid or semi-solid form of petroleum. available for application under unfavourable climatic conditions and heavy loads. Often, the so-called SBS-polymers (styrene-butadiene-styrene) are used for bitumen modification2Polymer modification of bitumen is the incorporation of polymers in bitumen by mechanical mixing or chemical reaction.. By nature, they are caoutchouc (rubber). Interacting with bitumen, SBS-polymers increase its flexibility3Flexibility of a material is a character related to the toughness property of the material, not to its elasticity; it is resistance against impact loading., elasticity4Elasticity is the ability of a body to resist a distorting influence and to return to its original size and shape when that influence or force is removed. and strength5Strength of materials, also called mechanics of materials, is a subject which deals with the behavior of solid objects subject to stresses and strains.. Such polymers reduce the binder’s sensitivity to extreme temperatures and allow for significant improvement of its performance characteristics compared with unmodified bitumen.

The compatibility of bitumen and polymers is essential to obtain a high-quality final product. In such case, the polymer is able to absorb oil components of the binder, preserving the structure. Due to the modification process, bitumen is turned into an elastomer6An elastomer is a polymer with viscoelasticity (i.e., both viscosity and elasticity) and very weak intermolecular forces, and generally low Young’s modulus and high failure strain compared with other materials. that possesses better elasticity.

Modern petrochemical industry professionals attempt to maximize the yield of light oil products and extract most of the paraffin-naphthenic fractions from bitumen. This reduces its flexibility at low temperatures and reduces the softening point at high temperatures. Most modern bitumen will lose elasticity at approximately twenty degrees (20 0C) and begin to soften at between +45 0C to 48 0C. The use of non-modified bitumen therefore, in both road construction, which requires a binder with a temperature range from -40 0C to +70 0C, and for roofing materials, which are often subjected to temperatures up to 90 0C, is not efficient. Fortunately, there are ways to change and improve the properties of bitumen by mixing it with various additives. This is best achieved in special bitumen modification units such as the GlobeCore UVB bitumen modification system.

The least expensive method of improving bitumen’s useful temperature range is to add a large amount (15% or more) of mineral filler such as chalk or talc. The result is a very thick product mostly used as a mastic.

It is far more popular to modify bitumen using byproducts of other processes, such as rubber pellets from used tire processing or rubber resin ataxic foam propylene. Unfortunately, the technology of mixing such filler with bitumen requires temperatures above 180 0C. Such high temperatures will disintegrate the structure of the rubber resin and oxidize the bitumen. The result is a modified bitumen with a high softening point7The softening point is the temperature at which a material softens beyond some arbitrary softness., but with low ductility, elasticity and high brittleness8A material is brittle if, when subjected to stress, it breaks without significant plastic deformation. at low temperatures. This makes it difficult to use in road construction. The alternative to high heat is to introduce more components (swelling accelerators, plasticizers, and adhesives), thus significantly increasing the cost of the modified bitumen.